Want to be a successful marketer? Choose like one.

In part one of this series, we introduced you to some unsettling realities about how decisions get made on the trillions of dollars invested in B2C marketing each year.

This week we turn our attention to the attributes of successful decisions and the dangers of focusing on the wrong decisions; and we tap the insights of decision-guru Mike Whitaker for guidance on deciding the future of your marketing mix.

Keep Your Eye on the Prize: Revenue.

Not to put too fine a point on it, but you’re in business for a reason: to make money. Yes, lots of things go into that, and lots of good things can come from it. But if you’re not hitting revenue targets, none of it matters.

And the reality is that historically marketers haven’t had compelling metrics to demonstrate the financial value of their investments—at least to the satisfaction of CEOs, CFOs and other C-suiters. Sure, good marketers had numbers, but they were often dismissed because they weren’t the same metrics everyone else in the leadership team was following; namely, P&L impact. 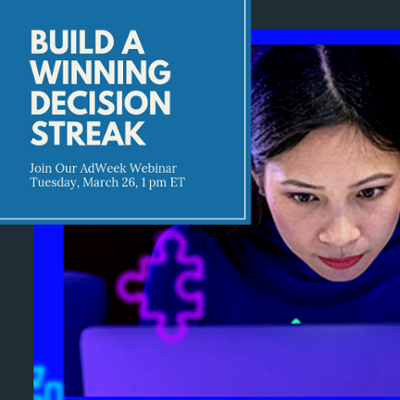 In fact, Sharat Sharan, president and CEO of ON24 Inc., says that even as CMOs outspend CIOs on technology, many marketers are still stuck in a pre-Big Data mindset:

“I remember when I thought about our marketing spend much like I did about playing roulette, like throwing money on the table hoping it would pay off. I assumed that, like gambling, our marketing budget was simply the cost of playing the game.”

Sharan believes that today, “CMOs must redefine success in the same way a CEO does, with an unrelenting focus on revenue.”

Not All Decisions are Created Equal

This is where Whitaker’s ideas about decision making really come in handy. As he explained in a Fast Company interview, knowing the difference between small, medium and big decisions can make all the difference.

“You’ll make 150 small decisions a day. There is room to play with the consequences because they’re low.” Big decisions are much rarer—and come with much more serious consequences. Creative, promotions, PR strategy and similar marketing decisions ,typically can  be classified as small or medium.

Marketing mix strategy and channel investments—the kinds of decisions you make once or twice a year—are a big deal.

What’s essential is keeping those super-sized decisions aligned with clearly defined goals. How? According to Whitaker:

Maybe the most important rule of thumb? Whitaker says to remember who’s in charge. “People often give up control to things like fate and luck. There is no such thing. If we own our decisions, we get what we choose. Good things come to those who decide.”

If at First You Don’t Succeed, Think Quick

As you embrace this process, what could possibly go wrong? Don’t worry, you’ll find out. Even with the best, most timely data you can get your hands on, things don’t always go according to plan. Which means you won’t always be right. But you can always be smart.

The key to success is failure—learn from errors and course-correct as quickly as possible. Advances in decision tools, like Keen's platform, let marketers break their big decisions into smaller bites; setting an annual plan, but also regularly updating the models to account for and react to changes in today's rapidly changing marketplace.

As Whitaker puts it,:

“When successful people have enough evidence that they’ve made a bad decision, they don’t look for more. They fail fast, move on, and then they don’t talk about it again.” He cautions that “this isn’t a matter of trying harder—that’s a good intention trap, but it’s always more of the same. You’re already trying hard.”

Instead, Whitaker says to go back where you started: your core goals. Reflect on what you’re really trying to achieve, and adapt accordingly. And whatever you do, don’t go down the rabbit hole of “goal grooming,” or changing a carefully considered goal to fit current circumstances.

Want to hear more about this approach to decision making? Have questions about how to apply this winning framework to your marketing investments? You’re in luck.

Sign up for our upcoming webinar with AdWeek and you can go in-depth with Mike Whitaker and Keen CEO Greg Dolan. You’ll get insights on how successful marketers are sizing and prioritizing decisions, hear examples of effective decision-making in the real world, and find out how to think quickly (without acting rashly). You’ll also get a discount on Whitaker’s book, The Decision Makeover: An Intentional Approach To Living The Life You Want.